Home
About Us
History

Home
About Us
History

A workshop on "Opportunities for business in carbon constrained economy" was held on January 28th, 2008, at South Indian Education Society Campus, Nerul, organized by SIES Institute of Environment Management and Care Sustainability. The workshop was inaugurated by Dr.Ram Babu, Managing Director, Cantor CO2e.

The session also covered the scenario post 2012 when the Kyoto protocol regime expires and the scope of regulatory markets and voluntary markets in area of carbon economy.

He elaborated about the steps involved in CDM project cycle, barriers to CDM procedure and what could be the ways of overcoming these barriers and financing options and who are all the market players in CDM market including the buyers and sellers.

Dr. Suju George the convener of the workshop presented her views about two case studies illustrating the development of carbon asset and its monetization. First case that of Bagasse based power generation' in a sugar industry illustrates the development of a CDM project activity into a "carbon asset" and how it got monetized. The second case study illustrates with a carbon business model wherein proponent identifies an investor to project finance a 'biomethanation of poultry waste to energy project'.

Mr. Asim kumar Jana, Head-Energy and Carbon Services, TUV India Pvt.Ltd. spoke about GHG market and Validator's role in validating the projects designed under the CDM regime. He briefly explained about the validation and verification process and the concept pf Carbon neutrality.

Mr. Nixon, Assistant General Manager, State Bank of India, spoke about how to achieve the low carbon economy. He explained that there would be a market for low carbon energy products of $ 500 billion per year by 2050 and why companies should go carbon neutral. He enlightened to the audience about the various investment opportunities through Investments in energy efficiency equipment producing companies and for Carbon Funds. 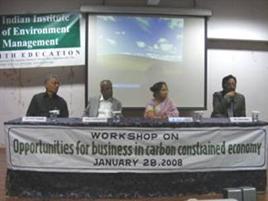